As you may have already heard, after having a very low consumption rate of its latest release i.e. Windows 8 / 8.1, Microsoft has decided to take action in order to improve their OS and win back its users hearts.

One of the actions they’ve taken was to assign a new CEO – Satya Nadella, instead of the resigning Steve Ballmer.

This move, knowledgeable people in the field are saying, has come as a direct result for the plummeting sales and adoption rate of the company’s flagship product – Windows operating system.

The second move they did was the announcement that the new, upcoming Windows release (nicknamed ‘Threshold’) would try to address the low adoption rate issue by changing some of its UI elements in order to rehabilitate the functionality and attractiveness of its desktop interface.

Unfortunately, the mockup above has no direct relations to Microsoft’s next operating system, however this could be one of the directions Windows 9 is heading for.

Although currently there’s no official preview release of the ‘Threshold’ version, personally, I sincerely hope that Microsoft would take inspiration from the above mockup and create something along the lines of it.

And even if they won’t, perhaps someone with the needed skills might make a reality out of this.

Wouldn’t you love to see this concept implemented for real instead of the current design? express your feelings in the comments below… 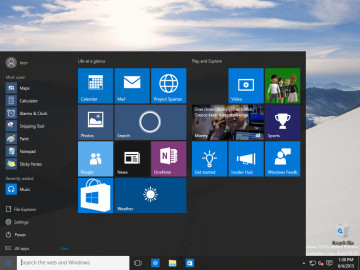 Windows 10 Available From July 29, Should You Upgrade / Switch?