While more than 90%[1] of its users are still running versions 4, 5 and 6, Google is already preparing to release the next Android version along the line – version number 8.0, code-named “O” (that’s the alphabetic letter not the number).

The speculations regarding the candy names that might be associated to the letter O are at their peak (will it be Oreo? we shall wait and see), and in the meantime we’ve been given a glance of the initial features set to be present in O’s release.

Battery life improvements – additional automatic limits on what apps can do in the background will force apps and apps-makers to have minimal impact on a user’s device and battery.

More control over notifications – using a new feature called ‘notification channels’ users will be able to block or change the behavior of each channel individually, rather than managing all of the app’s notifications together.

Improvements of notifications display – new visuals and grouping to notifications will make it easier for users to see what’s going on when they have an incoming message or are glancing at the notification shade.

Enhancing users control over autofill – instead of letting each app manage passwords and login details (commonly used for autofill purposes) individually, O integrates the ability to set an app selected by the user (similar to the way users select a keyboard app) that will store and secure user data.

Play videos on top of other apps – thanks to a newly added Picture in Picture technology, users will now be able to watch a videos while answering a chat or hailing a car. Although the feature had already existed in several apps (such as YouTube) that implemented it singularly, it will now become available for all apps, platform-wide.

Icons adapt to device’s interface – a new mechanism will enable apps that uses it to display icons in different shapes, according to the device’s specifications.

Better audio over Bluetooth – support for high-quality Bluetooth audio codecs such as LDAC codec is added in O.

Enhancing devices intercommunication – support for new Wi-Fi Aware technology lets devices with the appropriate hardware discover and communicate with each other over Wi-Fi.

It’s important to mention that the feature list is based on the current developer preview and does not yet represents the full list of features that will eventually be included in Android O once it’ll be released. Additional features might still be added as time progress.

An additional three more developer previews will be made, coming in May, June and July, then a final, official release is scheduled for the third quarter of 2017. 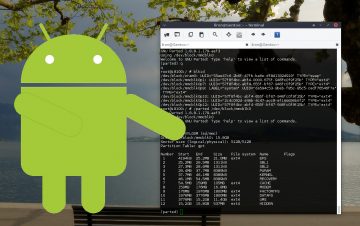 How To: Re-partition Your Android Tablet Or Smartphone? (All Options Included: Change Size, FS Type, Etc…)