Only less than a week ago, I’ve published here on iWillFolo a post about WhatsApp competitor – Telegram which had finally released a cross platform desktop app to accompany its mobile version.

Just like mushrooms showing up after the rain, it appears that yet another desktop client of the app has recently raised its head.

Allow me to introduce you – Cutegram: a Linux-intended desktop client for the Telegram app.

What’s So Special about Cutegram?

Cutegram is leveraged by several mainstream Linux technologies such as, Qt 5, QML, libqtelegram, libappindication, Faenza icons, etc…  and the final result is quite a remarkable third-party app.

Unlike the official Telegram desktop app, Cutegram comes with a different set of Emoji icons (Twitter open source emojies) and has built-in support for starting a “secret chat” and “group chat” right out of the box.

The rest of Cutegram has to offer, I think it’ll be better if I’ll just let you explore yourselves.

Before I’ll end up this post, detailing how you may get Cutegram on your Linux, here’s a screenshot of both official Telegram and Cutegram right next to each other so you could see the defference between the two.

Cutegram can be downloaded directly via its official website (link below).

Note: if you’re not using Ubuntu or one of its compatible derivatives then you probably should go with “Linux installer” download link which in my experience really worked out of the box.

Simply double click the downloaded file or run it in terminal, it’ll create a folder called “Aseman” in your home directory and a Cutegram.desktop file on your desktop / desktop folder through which you’ll be able to launch the app. 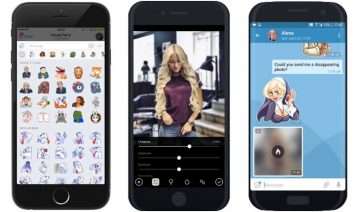 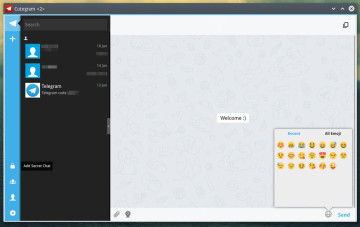