It was about a month and a half ago, when it was published, here on iWillFolo©, that a new Linux distribution is on the makings, the name of this new distro is now revealed to be Ozon OS.

Numix and Nitrux, in case you didn’t know, had both began as a designers projects, creating some of the most beautiful icon sets the open source community have seen so far.

In fact, I myself am using one of their sets called Numix-Circle, and I certainly am recommending it for any user who wants to have a pretty desktop at his hands.

Back to Ozon, the project has already started showing some progress, and of course this is only the beginning, so there’s much more to expect.

Here are some of the new features that’s been exhibited in Ozon up to now:

As you can see it’s not much right now, however as mentioned above, Ozone is still at the very beginning of its development and much more should be expected to come in the future.

Judging Ozone by another designers driven OS project and also by the great success Numix and Nitrux icon-packs had, I’d say it wouldn’t be far from reality to predict some level of success to Ozon project too.

Whether it’ll become one of the greatest Linux distros or not, it’s yet, remains to be seen. 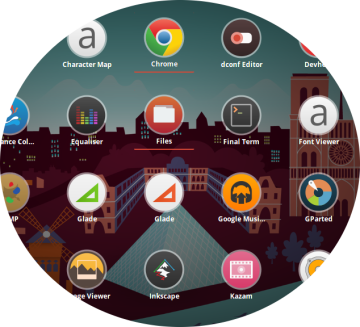 Have you caught up with the latest Numix circle icons?