But before we start…

Disclaimer: the following comparison was not made in a sanitized test environment as one you may find in a lab, hence it might not reflect an accurate statistic data, albeit on the other hand, it might be closer to a real-life, day to day performance experience.

We all know that both KDE and Xfce are some of the most customizable D.E’s Linux currently has to offer, yet the underlying gap between the two is quite a big one.

While the KDE environment is built upon Qt applications framework, Xfce on the other side of the coin is built using GTK+ tools, this in turn creates apps that are not only looking differently but also working (performing) dissimilarly.

In this comparison I’ve decided to focus on a specific launching speed criteria which demonstrates the performance of each desktop environment regarding the launching speed of apps.

In order to maintain neutrality, I chose apps that are either native to a certain environment or non-native to both of the environments, the below apps are representing: XUL, Qt, GTK 2 and GTK 3 apps respectively.

The above table shows us that all in all, Xfce is faster than KDE when it comes to the launching speed of different kind of apps.

Another way to see things is by using a bar chart, this might portray the picture a little bit better for you, if you’re a visual type of person. 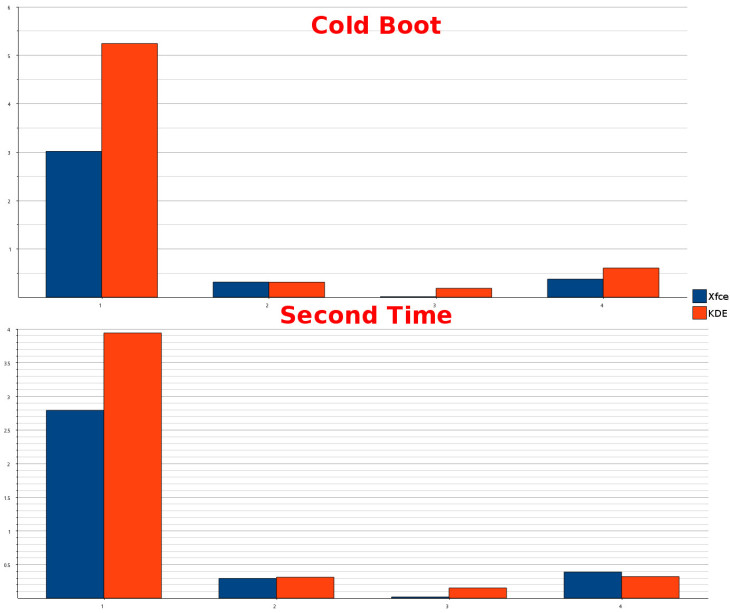 So, these are the results I got, since both environments are highly customizable it’s hard to choose one over another, yet if one has a preference for either speed or consistency then this might be the crucial push you’ve been looking for.

Lastly, feel free to add your thoughts in the comments section below…